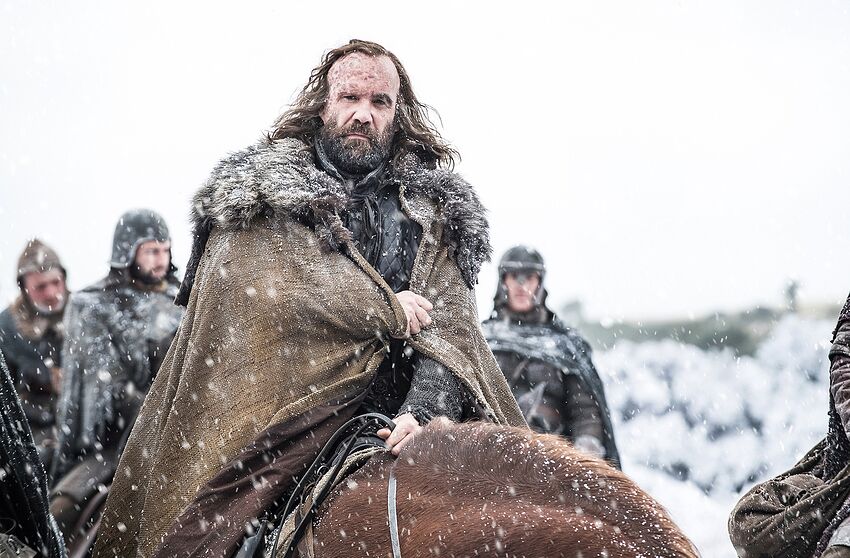 WiC Weekly: June 2-8 by Dan Selcke
Hodor stars in a KFC commercial, and other Game of Thrones funnies by Corey Smith

Last we saw Sandor “the Hound” Clegane, he had just finished murdering several of the men responsible for killing his new friend Brother Ray and his followers. “There was a feeling that he was coming to peace with himself,” actor Rory McCann told Stuff. “It only lasted an episode and suddenly he’s got an axe in his hand and he’s chopping people’s heads off so that was a fleeting thing.”

After he was done murdering for the day, Sandor sat down with with Beric Dondarrion, Thoros of Myr, and rest of the Brotherhood Without Banners, who offered him a choice:

He was left with the question, ‘Do you want to join the Brotherhood Without Banners and fight this evil that is coming our way or do you want to carry on down that road with your axe and your rage?’ I won’t tell you which path, which walk, I took if you don’t mind. It will be worth the wait.

I think a lot of fans are assuming that the Hound will take the Brotherhood up on its offer, not least because promotional images have shown the Hound riding alongside Beric Dondarrion in a snowy locale. But McCann deserves credit for trying not to let the cat out of bag. (“It’s getting colder” is the closest he comes to purposefully spoiling something.) The other reason is because, however many evil acts he may have committed, the Hound still comes across as a decent-ish person, way deep down. McCann agrees:

Most people realise I think, The Hound, he’s not a bad guy. He’s damaged goods but he’s sometimes morally doing the right thing. You’ve seen in the past The Hound guarding with his life the Stark girls and trying to keep them safe and maybe that’s to do with his past, of being bullied by his big brother (Gregor aka The Mountain) and that kind of thing.

Circling back to the question of where the Hound is headed in season 7, McCann gives it away (or rather, confirms what photos already told us) when he talks about how many of his scenes involved snow. “Most of our scenes, if they haven’t been in a blizzard, have been pretend blizzards,” he said. “We have been lip reading to each other most of the season because there is a fan going wheeeee and someone throwing snow in my face.”

And when he wasn’t fake-fighting in a blizzard, he was doing it for real. McCann talked to the Daily Record about filming parts of season 7 in Iceland, a country he loves but which he’ll admit can present certain difficulties when it comes to filming outdoors. “It’s not very nice when you’re wearing a prosthetic head and the sweat that has been accumulating during the morning has literally frozen. There were some horrible times.” 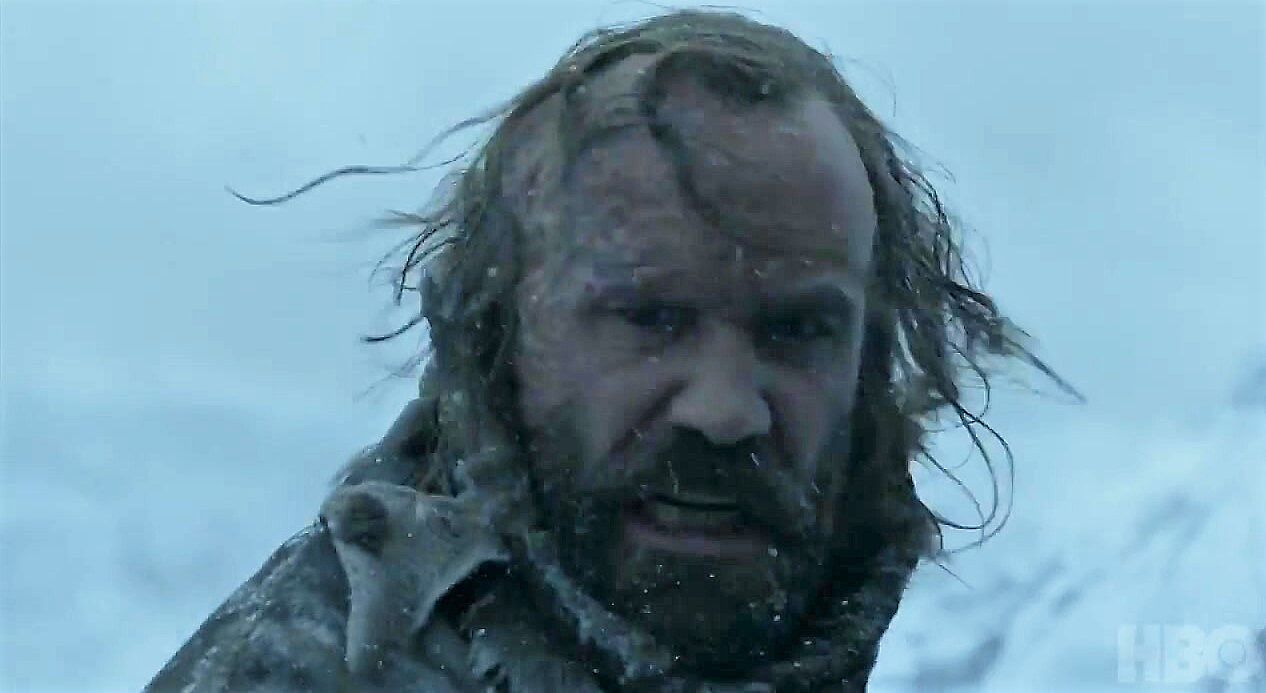 The Hound as glimpsed in the official trailer for Game of Thrones season 7.

Stuff also talked to Gemma Whelan, who teased the kind of fights that Yara Greyjoy will get into in season 7. “The fight scenes are enormous fun to do, but they need such respect and precision and often you are not given a great deal of training because there is not time,” she said. 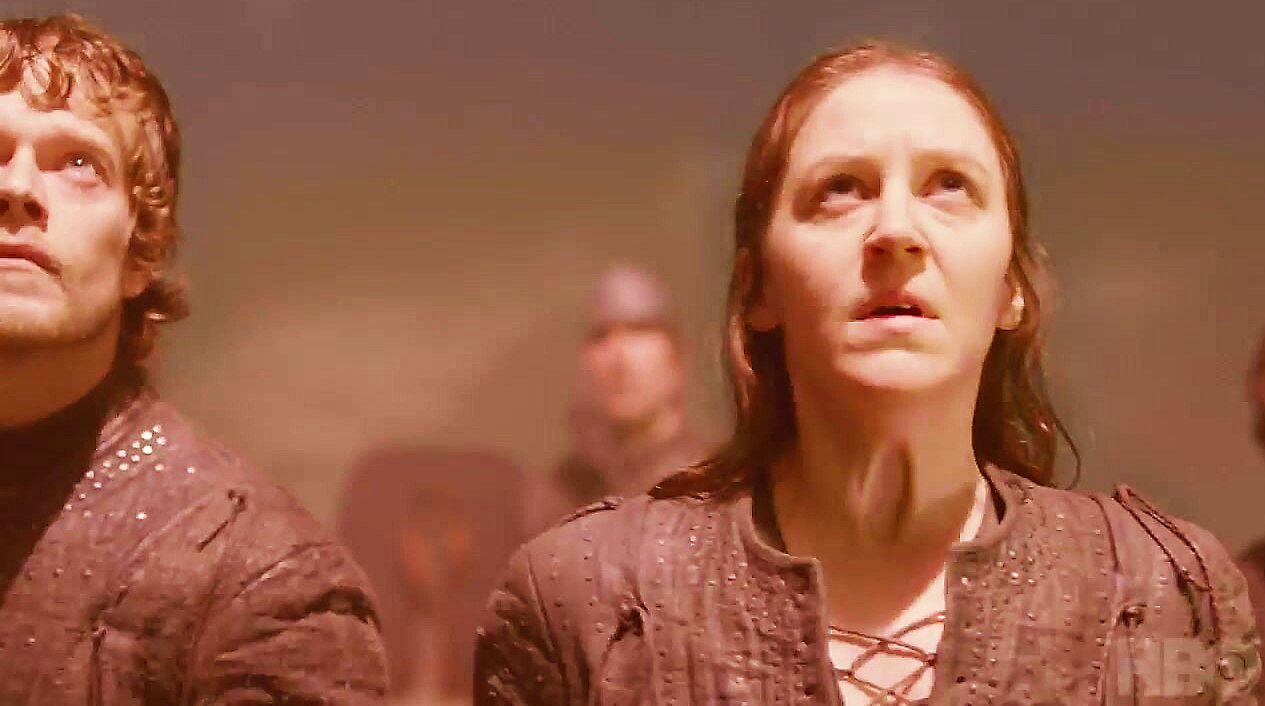 One story in particular stood out. “When you learn the fighting choreography you learn it in a huge tent, by yourself, on a load of mats with no other people around, and do it very slowly and you take it step by step. But one of the really important things that I didn’t get taught was pulling, so that when you go in to hit somebody you don’t actually hit them,” she explained. “You almost but then pull.”

And for some reason, I’d either not clocked that or hadn’t been taught it and so I was really whacking people. I was given a rubber axe to start with and then they thought because I was a dancer I was quiet co-ordinated, I had a good awareness of space, they gave me a real axe. They said, ‘I think you’ll be alright with this because the lads have got protection on and stuff’. They called action and we had one take of this scene in this really confined space with everything going nuts and I nearly killed a Liverpudlian man and they took it off me very quickly and said, ‘It’s not going to work for us’.

I’m sure that story will be funny in time…or right now.

Anyway, Whelan also said that Yara will make good on her promise to Daenerys to abandon the Ironborn way of life, which mostly consists of reaving, raiding, and raping. “It’s a great testament to her ability to be open minded about how she needs to change in order to move on,” she said. “She really has a great idea about taking care of the whole, the bigger picture, and not just taking care of herself even though she’s gone about it in her own unique way.”

Beyond that, can Whelan tease what happens in season 7? Not overly. “[W]e left me on a boat,” she told The Sunday Times. “[S]o it would follow that you would find me on a boat. But I’m not ruling out being on land. How about that? Let’s not rule out any land!” That clears that up.

Whelan also offers oblique hints about a season 7 action scene in which she’s involved, one that earned her “little scabs all over my chest and my head.”

They’d call ‘Action! Turn over’, all that stuff, then ‘Embers!’ would be another shout you’d hear. I’m, like, ‘Embers? What are embers?’ Then suddenly there are these sparks, almost like in Flashdance. They’re firing burning embers at you! It looks awesome, I’m sure, but it’s hard to look really serious when your head is on fire.

Although she didn’t get into specifics, she’s probably talking about the scene aboard a flaming boat we’ve glimpsed a couple of times in trailers.

We’ll see what trouble Yara gets into when Game of Thrones returns on July 16.

Next: A Greek promo for Game of Thrones season 7 contains all-new footage!