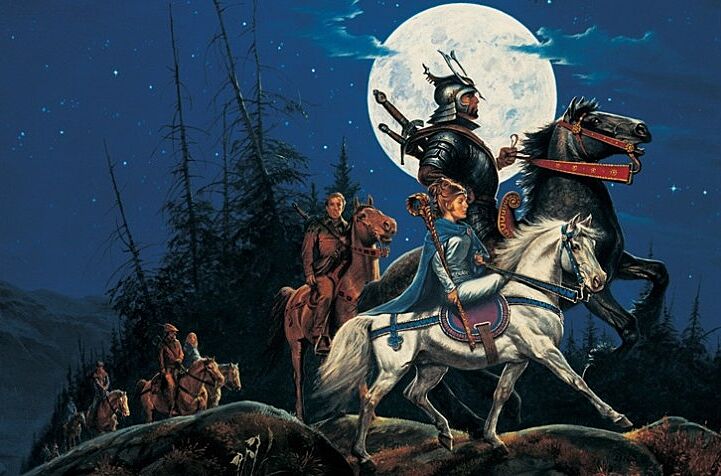 In a mere month, we’ll be embarking on a new decade of television. With it comes a stream of new fantasy series following in the footsteps of Game of Thrones. The name of the game is adaptation, and there are several to look forward to on the horizon. With over 80 million copies sold, Robert Jordan’s The Wheel of Time has the fandom to make Amazon’s upcoming adaptation its most successful show.

Unlike the massive Lord of the Rings project underway, The Wheel of Time will introduce a fantasy world that many TV and movie fans are unfamiliar with. The goal of this article is to provide context and introduce the heroes many will hopefully come to love if The Wheel of Time show is as good as it looks.

I love this series but oof these covers look so generic. It gives no sense of the story unlike for example this cover for Eye of the World. pic.twitter.com/P8LVBy4iEr

Robert Jordan began writing the first volume of his series, The Eye of the World, in 1984. His influence was none other than J.R.R. Tolkien, author of The Hobbit and The Lord of the Rings. In an interview with Audio Renaissance’s Laura Wilson, Jordan said:

I began writing the Wheel of Time because a great many notions had been bouncing around my head. I wondered what it was really like to be tapped on the shoulder and told, ‘You were born to be the savior of mankind.’ I didn’t think it would be the way it is in so many books, where somebody pops up and says ‘Hi, I was born to be the savior of mankind and every else says ‘Oh, well, let’s go then.’ I thought self interest would play a big part.

And then finally there was the thought about something that happens in Tolkien and a lot of other places. The wise old wizard shows up in a country village and says, ‘You must follow me to save the world!’ And the villagers say ‘Right then gov, off we go.’ Well, I did a lot of growing up in the country, and I always thought that what the country folk would have said is, ‘Oh is that so. Look here, have another beer. Have two, on me’ and then slip out the back door.

Originally planned to be six novels, the series stretched into 14 books, along with a prequel and two companion books. During the series, prophecy plays a critical role in driving the story forward.

As Jordan said, he looked to Tolkien when kicking off his series. Instead of the wise old wizard showing up in the country backwater, a sorceress named Moraine Sedai, to be played to TV by Academy Award nominee Rosamund Pike, finds destiny hidden in a village of farmers and craftsmen, far from the nearest city. Moiraine, who is a member of a shadowy political organization of sorceresses called the Aes Sedai, embarks on a dangerous, world-spanning journey in the company of five young men and women. She believes one of them might be the reincarnation of an incredibly powerful individual from an age long past. Prophecies say this individual will either save humanity or destroy it.

The village Moiraine travels to is named Emond’s Field, and is located in a region known as the Two Rivers. In an interview with Robert Jordan from the prologue of Crossroads of Twilight, he said that he wanted the early chapters of The Eye of the World  to evoke the Shire from Middle-Earth in Tolkien’s The Lord of the Rings. Emond’s Field is a peaceful community with a strong sense of identity and a people who are stubborn to a fault.

Here, festivals and dancing are common, and monsters belong only in stories told to frighten children. There is no violence in Emond’s Field, maybe a fist fight, but never a killing. In the Two Rivers, there are no lords and ladies, only sheep. It is no wonder those growing up in the village want to see something of the world, yet even so, not many villagers leave their farms in pursuit of adventure.

Does this photo tweeted by showrunner Rafe Judkins depict the filming location for Emond’s Field? It certainly looks bucolic enough:

Our heroes will grow up here. They each have their roles to play in the village, but they each dream of escape and seeing a world they only hear about from passing traders and performers, and in stories. Our heroes talk of one day having adventures far from their isolated village, but for now, their biggest problem is making sure wolves don’t raid their sheep and cattle. What our heroes don’t know is that the tales they’ve heard are real, and that the reality isn’t as glorious as they thought.

Thanks to our friends at Amazon, we know who’s playing each of the five main characters from Emond’s Field. So let’s introduce these would-be heroes, and the actors who will finally be bringing them to life.

“It was about a woman who would not bend her back while she was beaten, and who shown with a light for all who watched.” @TigerMadden as Egwene Al’Vere #WoTWednesday #TwitterOfTime pic.twitter.com/bBtUdcIT88

Who is Egwene al’Vere? She is the youngest daughter of the mayor of Emond’s Field and will be played by actor Madeline Madden. In the books, she is about 18 years old and had just earned the right to wear her hair in a braid, a symbol of womanhood in the Two Rivers. Like the actor who plays her, Egwene has big brown eyes and is short of stature; Madeline Madden stands at 5‘6.

The best word to describe Egwene is “fierce.” She is determined, capable, and her favorite stories were always the funny ones, or stories about women outwitting people who were supposed to be smarter than everyone else.

Well, maybe I’m strange, too. Maybe I want to see some of the places I hear about in the stories. Have you ever thought of that?

“It was about a woman who refused to believe that she could not help, could not heal those who had been harmed.” Zoë Robins as Nynaeve #WoTWednesday #TwitterOfTime pic.twitter.com/o8AUdHD5BZ

Who is Nyneave al’Meara? She is the “Wisdom” of Emond’s Field, a woman chosen by the village council to sit amongst them and provide knowledge and advice on topics such as healing and foretelling the weather, along with good common sense. She is older than the rest of our heroes, but is also the youngest woman to be chosen as Wisdom. She holds a position of great responsibility and authority, which some might say has gone into her head. She can be quick to anger and has a temper to make a stone tremble.

Nyneave is also protective and will do anything in her power to help those she feels she has a responsibility for. She’ll be played by Zoë Robins.

She flares up at anything, and never stays angry past turning around.

“It was about a man whose family was taken from him, but who stood tall in his sorrow and protected those he could.” @Marcus_Rudda as Perrin Aybara #WoTWednesday #TwitterOfTime pic.twitter.com/4UTcqdpySA

Who is Perrin Aybara? A young man from Emond’s Field with a stocky build who works as an apprentice to the village blacksmith. Perrin has large shoulders and larger arms from his time hammering at the forge. He is soft spoken, but in his own way, ferocious. His friends would describe him as slow to anger, but when that anger breaks, it rages. In the books, his curly hair grows as long as his beard, so fans are expecting an epic coif from actor Marcus Rutherford.

He was not boasting; Perrin seldom did. He was just telling the truth.

Who is Rand al’ Thor? A young farmer and sheepherder from the Two Rivers. In the books, he is known for his height, gray eyes, and reddish tinge to his hair. The actor playing him, Josha Stradowski, is 6’2” and shares the same red hair as Rand, and his eyes appear to be gray as well. He’s well chosen for the part.

Rand’s father, Tam al’Thor, will be played by Michael McElhatton (Roose Bolton from Game of Thrones). Rand ‘s mother died when he was young, and Rand remembers little about her aside from her smiling face, something he shares.

No one ever leaves the Two Rivers.

“It was about a hero who insisted with every breath that he was anything but a hero.” @BarneyHarriso as Mat Cauthon #WoTWednesday #TwitterOfTime pic.twitter.com/OWisit2CXM

Who is Matrim Cauthon? A young farmer from the Two Rivers with deep eyes and a mischievous smile. He is a wiry fellow and known amongst his friends as the prankster of the group. Everywhere he goes, trouble follows, even if he’s not looking to make it. It finds him.

Mat is a true wildcard, and has a mouth to make a sailor cringe. He’ll be played by Barney Harris, who has already received praise for matches his book description. Fans will be looking forward to the first time he utters the phrase, “Blood and bloody ashes,” a common swear in this fantasy world.

You are just stupid enough to do that, aren’t you, Matrim Cauthon?

Those are the five heroes from Emond’s Field who will accompany Moraine on her dangerous quest to prepare the world to face an ancient evil. On their journey, they will meet other companions who will play a role in this story. Judkins recently tweeted about the writer’s room for season 2, so hopefully new casting announcements are coming.

Next: The 50 most iconic looks from Game of Thrones